Robotics in healthcare is an often overlooked industry segment. While still in its infancy, we will see incredible developments to improve health and ease of movement in the coming decades. I look forward to taking up tennis in my 80’s.

Robotics in healthcare is an often overlooked industry segment. While still in its infancy, we will see incredible developments to improve health and ease of movement in the coming decades. I look forward to taking up tennis in my 80’s. 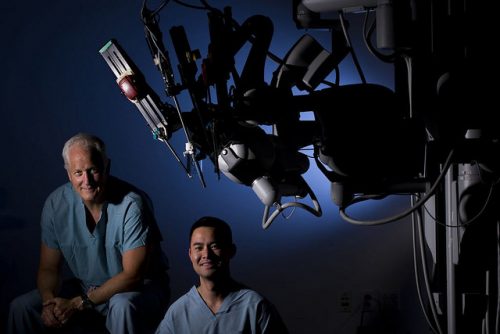 Historically, robotics has seemingly produced more novelties than any other industry. We’ve seen laughably useless creations such as Harvard’s origami-folding robot and Disney’s sand-art robot. But now that the field has matured, the winds seem to be shifting in a more utilitarian direction. Robots can not only be useful, but also lifesaving. Robotics has made exciting advancements in health care technology in the past few years, and the potential for medical robots appears limitless. Here are five robotic inventions that hold the most promise for medicine.

Although some time will pass before nanobots are ready for widespread use in the blood, their potential is astounding. Scientists hope that nanobots will soon be able to imitate our own white blood cells, fighting diseases and bacteria. Blood nanobots may also eventually deliver chemotherapy that is a thousand times as potent without as many side effects.

Frequently, concerns about melanoma — the most lethal form of skin cancer — prompt doctors to biopsy abnormal-looking moles that are actually benign. Biopsies, however, are surgically invasive and often leave scars. To lower the number of unnecessary biopsies, MELA Sciences built the MelaFind.

The nexus between the MelaFind and health informatics is fascinating — the device compares the images it collects against a database of 10,000 digital pictures of melanoma and other skin cancers. While technology may animate the MelaFind, health data has made advancements in melanoma research possible.

Telemedicine — using Skype and other video-chat technologies to connect doctor and patient — has already brought expert care to underserved areas, but robotics took the concept one step further. State-of-the-art medical robots can now roam the hallways of hospitals and complete routine rounds like their human counterparts. The FDA-approved remote presence robot comes equipped with a two-way video screen that allows one doctor or an entire multidisciplinary health care team to beam into a patient’s room from anywhere.

Sten Hemmingsson invented the robotic Bestic arm when he needed assistive technology to eat. The arm holds a spoon and allows the user to choose what to eat on a plate and when. The controls of the Bestic arm can be adapted to each user and include buttons, foot controls, a joystick, or other devices the user prefers.

5. PARO: Healing Children One Robot Baby Seal at a Time

Therapists have long known that children with developmental disabilities respond well to animal therapy. Unfortunately, therapy with live animals presents a host of problems that makes this therapy option impracticable. PARO invented a compromise with its robotic baby seals that look like stuffed animals but act like real seals. The furry seals can learn their own names, blink, and express different moods depending on how the child interacts with them.

Of all the innovations robotics can develop for the world, its health care applications are some of the most exciting and arguably the most important. If these five ingenious inventions are any indication, robotics is positioned to revolutionize medicine.

To learn more about the advanced online programs available to you via UIC, including the Master of Science in Health Informatics, contact an enrollment advisor today.

Send us a Message

PART OF A GLOBAL NETWORK